Mike Forshaw, the mastermind behind Sale’s formidable defence, compares trying to stop Harlequins from unleashing their attacking flair tonight with a game of Snakes and Ladders.

The teams clash with Sale believing they can still claim a home semi-final play off, but to move a step closer to that target they will have to shut down a Harlequins team that has been scoring for fun this season.

However, while Quins have scored 79 tries in the Premiership they have conceded 66 and their leaky defence was witnessed in their breathless 44-33 win over Bath last weekend which guaranteed the club a play-off place. Now, Forshaw has the task of shackling Quins attack with his fearsomely physical defence to help Sale rattle up a match winning score to avenge the 24-12 loss they suffered in London in February. Quins are two league points behind third placed Sale and have collected an impressive 10 bonus points this season for scoring four or more tries.

Former rugby league star Forshaw has been a key figure in establishing Sale as title contenders with his 3D defence which revolves around discipline, detail and decision making. Having studied the Quins attacking threat Forshaw, who joined Sale in 2013, identified the opposition are prepared to suffer set backs to eventually come out on top and said “I liken Harlequins to the board game Snakes and Ladders because they don’t mind rolling the dice and going behind before they go in front and we cannot afford to get into that kind of loose game. We have to be really strict with our defence and we don’t want them hitting more ladders than snakes.

“From a defence point of view, taking on Harlequins is both daunting and exciting and can we stop them playing multi-phase?

“They are a very dangerous team from transitions and also if you don’t get your kick-chase right. We cannot fall into the trap of playing loose because they have players who can really hurt you and we have to stick to our processes and physicality. We have momentum but the players talk about having more in us and I showed some negative clips to them from the Bristol game were we go too tight and so they know there are improvements to make and that’s brilliant.”

While Harlequins top the Premiership’s scoring (637) and turnovers (130) charts, Sale have conceded the most penalties (248) while racking up a remarkable 21 yellow cards in all matches which, despite avoiding another card in 22-12 win against Bristol, still leaves question marks over their collective and individual discipline. Forshaw is keenly aware of the test his defence will face and added: “I think Quins will kick more than Bristol. We are building better discipline and that makes us tougher to break down and we do train with 13 or 14 players to deal with yellow cards. We create a situation with one or two in the sin bin and this week the opposition have been playing like Quins with multi phase attack to stretch us to the absolute limit.
“We talk about when the play appears to be dead to keep pushing as a defence and working hard which is the mentality we want throughout the team. We are very lucky with guys like Tom and Ben Curry, Jean-Luc and Dan du Preez and Jono Ross – great leaders. I think Cobus Wiese has been outstanding and the best unknown South African player in the competition.

“We talk about taking ownership and having good communication and we knew it would be physical against Bristol last week and now we have to keep that consistency. Our medical and strength and conditioning teams do a great job getting the lads right and we are all aligned.” 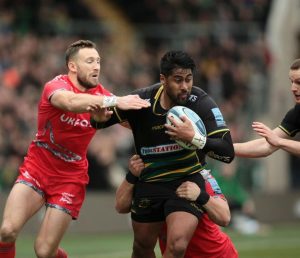